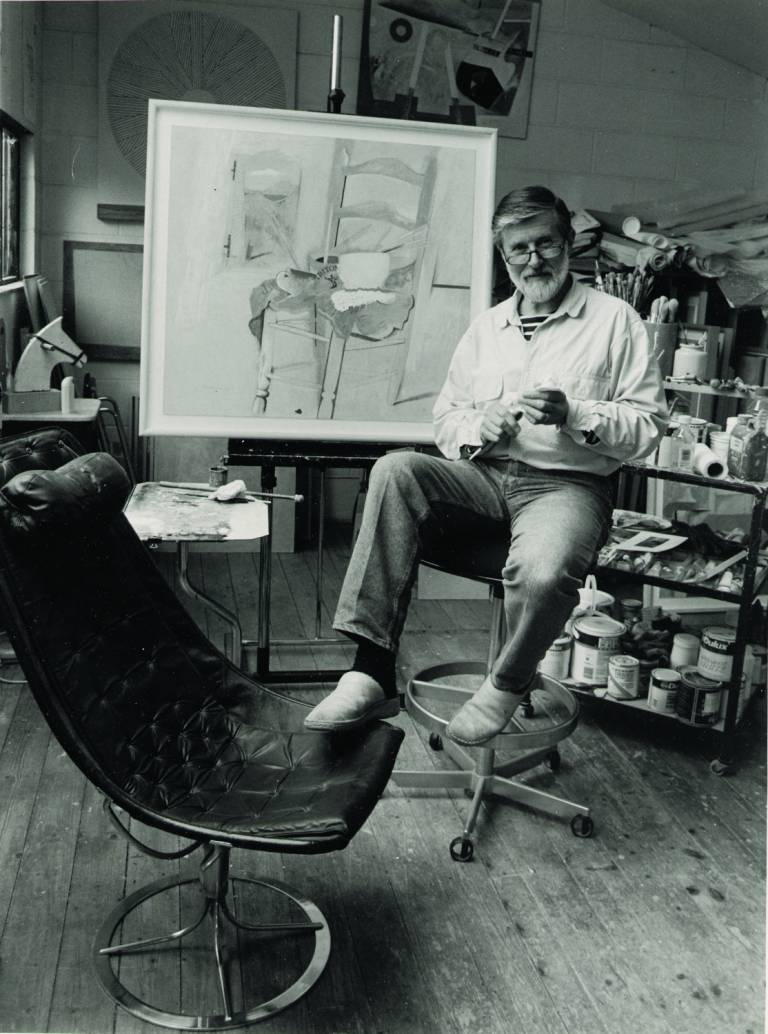 Paul’s artistic career began in 1943 when he began a course in architecture at the Northern Polytechnic in London. During his two years he was taught by Cecil Stephenson (1889-1965), one of the leading lights of the British avant –garde of the 1930’s.Stephenson was one of the most gifted and talented teachers of his generation. He was a key figure introducing him to abstract art.

With the nation still consumed by the Second World War, Paul’s student days were to come to an abrupt halt after two years when he was called up for national service in February 1945.after training at Sandhurst he was commissioned in the Oxford and Buckinghamshire Light Infantry. His first posting was to Jerusalem here he became Assistant Camp Commandant at the British Army base.

From the freedom as a student in London to the tensions of Palestine was a large leap for any young man. Indeed the conflict which was to engulf this area ever since, was experienced by Paul when three of his soldiers were killed in the King David bombing. However, amid the strictures and dangers of army life Paul found refuge in two important books  which wee to play crucial roles in his future work.

One was  The Other, written by Alfred Barr of MOMA New York and entitled Cubism and Abstract Art, was the basis for a seminal exhibition held at museum in 1936..The exhibition and book was to prove a turning point of artists, the book became a bible. For the first time the story of one of he most revolutionary art movements in the history of mankind was accessible and more importantly accessible, and understandable.

One of the fundamental planks in Barr’s elegant thesis was the absolute necessity to understand the cross-cultural/historical relationships. The return to the past; the observation of pure art forms such as African sculpture : the recognition of primitive art-all combined to allow the artist to shake free from what Georges Braque called ‘la fausse tradition”-the conventions that had governed, controlled and manipulated Western painting for nearly five centuries.

The sense of freedom which such abandonment entailed allowed artist to radically examine the fundamental of their craft. Instead of looking to the traditional principles of the past, the artist now looked anew to the elements which comprise the vocabulary of painting-form, space, colour an technique-and created a completely new pictorial language and a clearly defined set of aesthetic principles.

Until then, Paul had not experienced the reality of transcultural art forms in situ. True as a young boy he had visited the British museum on many occasions with his father. His excitement and intrigue must have been great since the age of nine he created what must have been his earliest work of art-a drawing of a post and lintel construction  which still survives. but the first chance to visit archaeological sites came during a period of leave from the army when Paul travelled to Cyprus. here he saw and marveled at cyladic art. over the years such as Avebury,Stonehenge, Carnac, Newgrange, and Knossos have continued to fascinate him.

Since his demob in early 1948, Paul has expressed endlessly, exploring the possibilities presented by architectural forms and their relationship to visual perception.in this the three-dimensionality of sculpture has played an important part. time and time again we find references from the ancient sculpture of Greece to the “modern” sculpture of Brancusi and Marini.

During the last seven or eight years Paul has explored several major themes. The first was the Chair-from ancient stone throne to the rickety wooden chair of Dylan Thomas. Then came the Boat-sea interlude-the celtic vessel to a paddle boat  steamer. Now he has in a sense come full circle. Sacred Stones takes us back to the Mediterranean, the area which first set his imagination alight all those years ago.as with all his thematic shows before, Paul’s present voyage reflects his delight and awe at the ancient world and the relative structure of “things”. the temple complexes with their alters and shrines, hidden chambers and white carvings intrigue and puzzle. Modern man with his so-called technological superiority still bows to the mastery of these anonymous ancient artists. The challenge for Paul was to interpret and translate these intricate creations within the limitations of his own medium.

Old work and new materials are now recycled and transformed the past and present are symbolically reunited. Joints are finely sawn and cut as they were thousands of years before. Colour is applied, drawings etched and washed. Tactile surfaces begin to emerge. Every element, every space is carefully and painstakingly created. Each work is a kaleidoscope of colour and construction. the result is a breathtaking visual opera-a fitting celebration for Paul’s seventieth year. Perhaps no living artist alludes more to Charles Baudelaire’s own aesthetic objective.

He has exhibited his art widely, including a number of one man shows at The Parkin Gallery, on the themes of "Sea Interludes", "Sacred Stones" and "The Chair". He has said that "the patching and painting of boats has taught me more about paintcraft than almost anything else".

He is represented in numerous public and private collections including the Royal Air Force Museum in Hendon, Wycombe Museum,