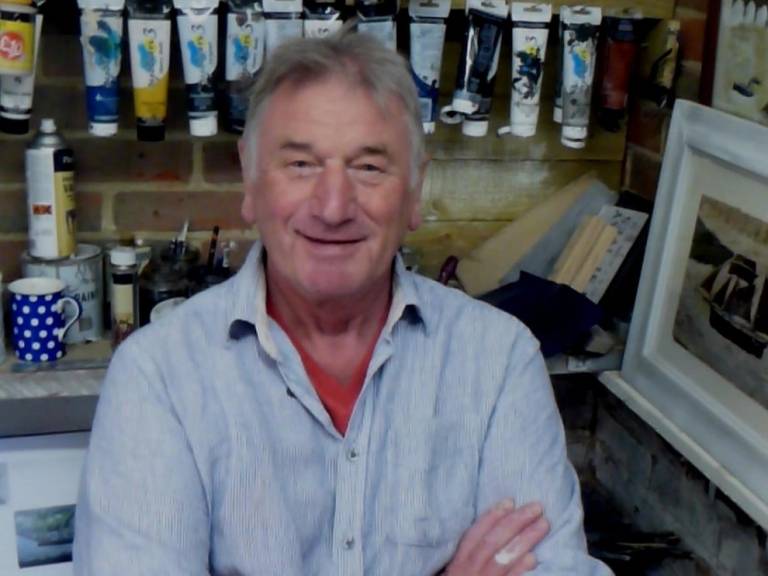 t was inevitable that after a long-held interest in all forms of primitive and naïve art, Max Wildman would eventually be drawn to the works of Alfred Wallis.

Indeed this was to happen one winter’s day during a visit to Jim Ede’s house at Kettles Yard in Cambridge. Viewing Alfred Wallis’ unique style at first hand and up-close had a riveting effect, and so began an enduring fascination for the life and work of this, the most enigmatic of St Ives characters.

Research into Alfred Wallis’ life, how he came to St. Ives and how he was discovered, served only to intensify that initial interest in his paintings. A period of keen study was made of the methods, techniques and materials used by Alfred Wallis – followed by a number of experiments (conducted out of sheer curiosity!) painting seascapes and ships using only those same materials and paints that Wallis himself would have used.

After a few false starts, some satisfactory results began to emerge – but needless to say, the Wallis influence was inescapable and more and more, the style, character and spirit of Wallis’ work soon began to assert itself onto those early attempts.  View Archive

It was not long before commissions were being taken from a growing clientele to produce works that were quite intentionally in the style of Alfred Wallis. View Testimonials. Interest has continued to grow apace, and now this Chichester-based artist’s work is much in demand from galleries, auction houses and private collectors, both nationally and internationally.

Untrained, (and perhaps just as well!) he first drifted into painting in 2005 – at around the same time as early retirement began to beckon. Now, most of his time is taken up with painting. He was born on Merseyside, but from an early age spent much time on the move – living in London’s East End, rural Yorkshire and the West Country. His chequered career path includes service in the Royal Marines, horticultural management, and latterly dealing in art and antiques. Interests include folk music, playing the mandolin, social history, gardening, travel, food & wine – and of course, Alfred Wallis!