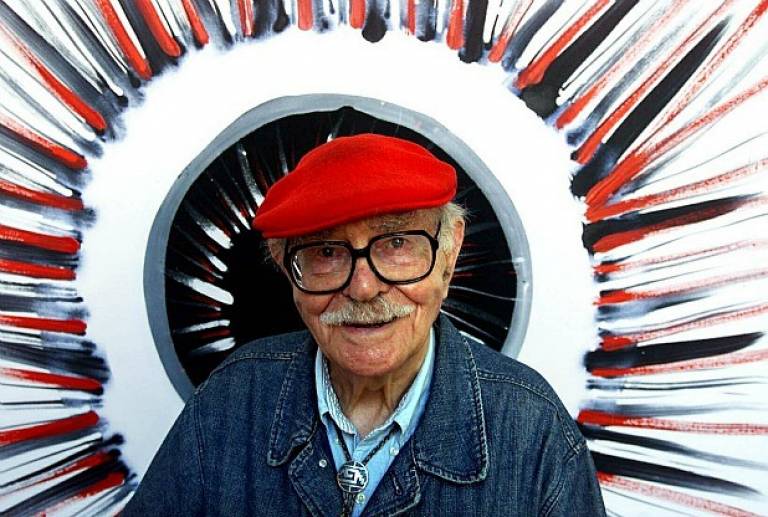 Over the course of his career, Sir Terry Frost became one of Britain's most prominent abstract artists. In his simple and poetic forms, bright and exhilarating colours spark off each other like electric charges, radiating energy outwards. It was under the guidance of Victor Pasmore and the influence of the St Ives artists (including Ben Nicholson and Peter Lanyon) that Frost moved into abstraction, producing three-dimensional work, and experimenting with collage and constructions.

Frost was born in Leamington Spa, Warwickshire in 1915. During WWII, he served in France, the Middle East and Greece. In June 1941, whilst serving with the commandos in Crete, he was captured and moved through several prisoner of war camps. It was at a camp in Bavaria that he began painting; he described how spiritual insight brought on by hunger awakened his creativity. Once freed, Frost studied at Birmingham College of Art and Camberwell School of Art, London. He became associated with the St Ives group, working as an assistant to Barbara Hepworth. His teaching career led him to Bath Academy of Art, the University of Leeds, Cyprus College of Art and the University of Reading. He was awarded the John Moores Painting Prize in 1965. He became a Royal Academician in 1992 and received a knighthood in 1998. His work has been exhibited widely on national and international levels, with exhibitions at the Hermitage Museum, St Petersburg; the Royal Academy, London; Tate St Ives, and Brooklyn Museum, New York, USA.