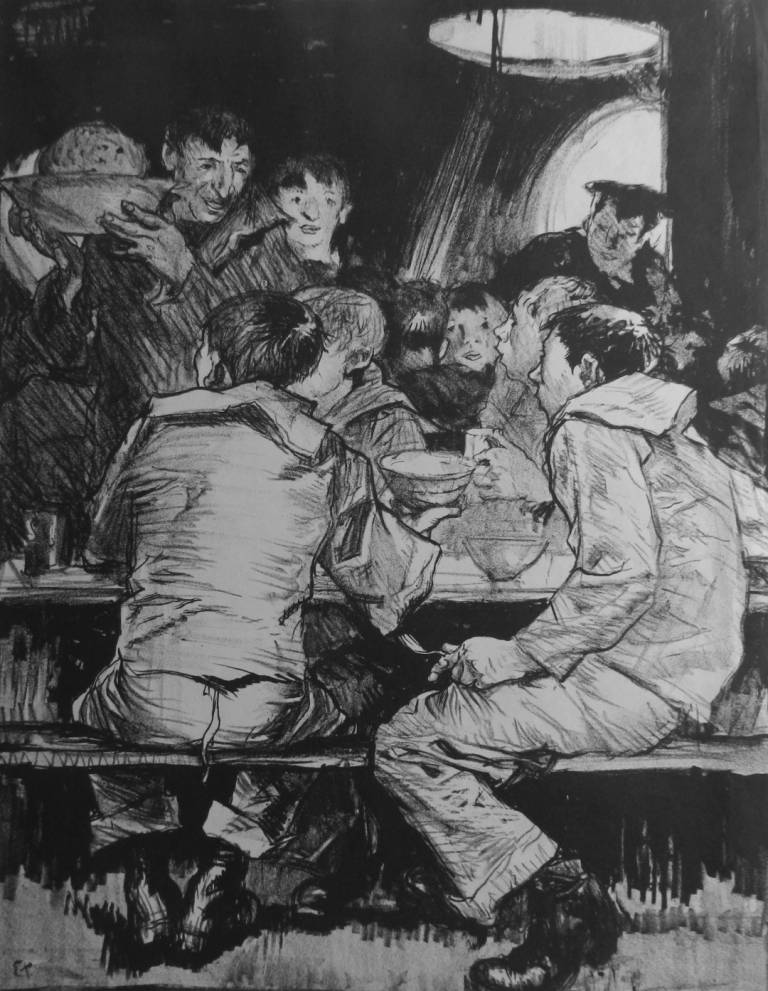 A prolific artist whose talents ranged across painting, illustration, mural-painting and designs for household objects, Frank Brangwyn produced over 12,000 works in his lifetime including several important public commissions.

Born in Belgium to Welsh parents, Brangwyn trained at the South Kensington Art Schools after moving to England with his family in 1875. He worked for William Morris from 1882 to 1884, where he learnt the principles of design and decorative arts. At the age of just 17, Brangwyn exhibited his first painting at the Royal Academy Summer Exhibition.

In the 1890s Brangwyn travelled to Europe, the Near East and South Africa. His travelling companion, the Scottish artist Arthur Melville, encouraged Brangwyn to incorporate brighter colours into his palette, reflecting the intense light and vibrancy of the subjects they encountered abroad.

From the early 20th century, Brangwyn began to receive commissions for public murals including the apse of St Aidan’s Church in Leeds, the Royal Exchange in London and Christ’s Hospital School in Sussex. He was elected an associate of the Royal Academy in 1904.

During the First World War, Brangwyn produced official war posters and made prints to raise money for the war effort, also serving as the President of the Royal Society of British Artists (1913-18). After the War, Brangwyn was elected a full member of the Royal Academy in 1919. His public successes led to a commission in 1924 for a pair of large canvases for the House of Lords to commemorate the fallen of WWI. Brangwyn’s first designs, taking two years to produce, were deemed too traumatic and he was asked to produce a more joyful alternative, celebrating the vibrancy of the British colonies. However, the finished works were rejected on account of their overly flamboyant colour and liveliness. They were instead purchased by Swansea Council where they still hang in the Guildhall.

The Lords’ rejection of the canvases deeply affected Brangwyn and he entered into depression. His outlook became increasingly negative; he began disposing of his possessions during the 1930s, donating vast numbers of works to museums including the British Museum and the William Morris Gallery. He increasingly focussed on religious subjects, also producing some furniture and ceramic designs.

In his final years, Brangwyn lived a reclusive life in Ditchling in Sussex, producing art according to his own sensibilities and disregarding contemporaries trends. His unique artistic abilities were recognised with a knighthood in 1941, and in 1952 he was the first living academician to have a full retrospective at the RA. He died in 1956.