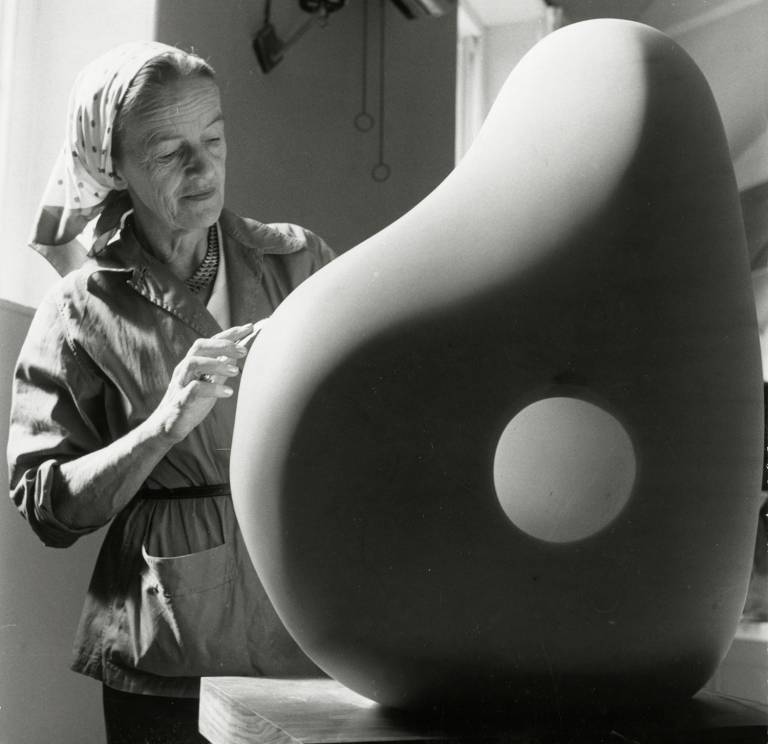 Barbara Hepworth, in full Dame Jocelyn Barbara Hepworth, (born January 10, 1903, Wakefield, Yorkshire, England—died May 20, 1975, St. Ives, Cornwall), sculptor whose works were among the earliest abstract sculptures produced in England. Her lyrical forms and feeling for material made her one of the most influential sculptors of the mid-20th century.

Fascinated from early childhood with natural forms and textures, Hepworth decided at age 15 to become a sculptor. In 1919 she enrolled in the Leeds School of Art, where she befriended fellow student Henry Moore. Their lifelong friendship and reciprocal influence were important factors in the parallel development of their careers.

Hepworth’s earliest works were naturalistic with simplified features. Purely formal elements gradually gained greater importance for her until, by the early 1930s, her sculpture was entirely abstract. Works such as Reclining Figure (1932) resemble rounded biomorphic forms and natural stones; they seem to be the fruit of long weathering instead of the hard work with a chisel they actually represent. In 1933 Hepworth married (her second husband; the first was the sculptor John Skeaping) the English abstract painter Ben Nicholson, under whose influence she began to make severe, geometric pieces with straight edges and immaculate surfaces.

As Hepworth’s sculpture matured during the late 1930s and ’40s, she concentrated on the problem of the counterplay between mass and space. Pieces such as Wave (1943–44) became increasingly open, hollowed out, and perforated, so that the interior space is as important as the mass surrounding it. Her practice, increasingly frequent in her mature pieces, of painting the works’ concave interiors further heightened this effect, while she accented and defined the sculptural voids by stretching strings taut across their openings.

During the 1950s Hepworth produced an experimental series called Groups, clusters of small anthropomorphic forms in marble so thin that their translucence creates a magical sense of inner life. In the next decade she was commissioned to do a number of sculptures approximately 20 feet (6 metres) high. Among the more successful of her works in this gigantic format is the geometric Four-Square (Walk Through) (1966).

Hepworth was made a Dame Commander of the Order of the British Empire in 1965. A Pictorial Autobiography was published in 1970 and reissued in 1993. She died in a fire in her home at St. Ives, Cornwall, in 1975; her home was preserved as the Barbara Hepworth Home and Sculpture Garden and is run by the Tate St. Ives, a branch of the Tate galleries.